JNU President Song Xianzhong received a delegation of five led by Han Zaihe, South Korea's new consul general in Guangzhou, on Oct. 14. Also attending were the heads of the university's International Exchange and Cooperation Office, School of International Studies and College of Chinese Language and Culture.

During the meeting on Double Ninth Festival, a traditional Chinese harvest festival that Korea shares, Song welcomed the guests and gave them a comprehensive introduction to JNU's history. He said JNU had always attached great importance to exchanges and interactions with South Korea and colleges there, giving students many opportunities for exchange programs. He also said JNU would further promote cooperation and carry out more student exchanges. 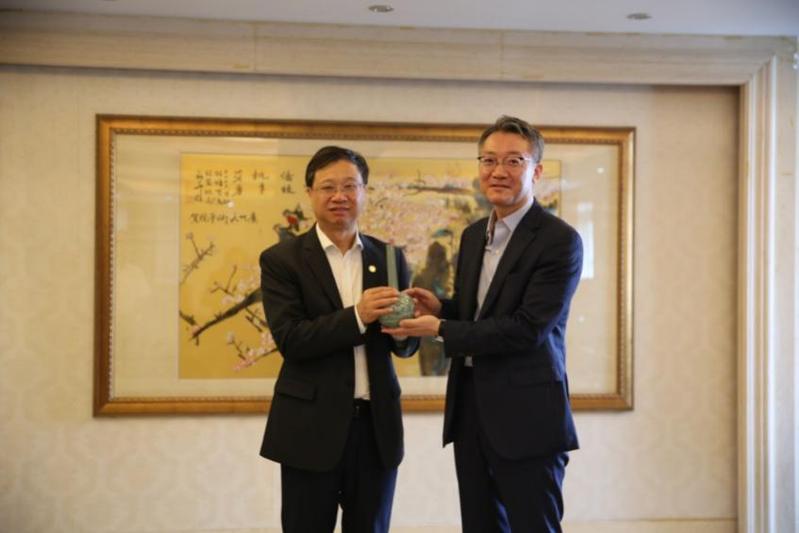 Han said the largest number of international students in Korea came from China and he would promote Koreans' study in Guangzhou. He then suggested setting up the King Sejong Institute in Guangzhou to spread Korean language and culture overseas.

Pu Ruoxi, director of International Exchange and Cooperation Office, welcomed the idea of the institute and said JNU was willing to learn more about it.  Yang Wanbing, vice dean of the College of Chinese Language and Culture, supplied information on international students at JNU over the last five years and encouraged Korean students to apply for the master's program in Teaching Chinese to Speakers of Other Languages. In addition, the College of Chinese Language and Culture offers both master's and Ph.D. programs for international students. Chen Dingding, deputy chairman of the School of International Studies, described the master's program in China studies in English and expressed his expectation that more Korean students would learn about JNU with the help of South Korea's Consulate General.

In September the China-Korea Cultural Exchange Year was launched to celebrate the 30th anniversary of the establishment of diplomatic relations. During the meeting, both JNU and South Korea Consulate General's delegation expressed their hope to further enhance cooperation and exchanges.