When audiences filed into the Academic Report Hall on Jinan University's Main Campus on Nov 12, a number of Minions in yellow coats, some with exotic faces, stood out from the crowd, scattered in different corners.

Then the moderator of the 2020 Looking China·Youth Film Project: Guangdong introduced them as the Looking China Project·Guangdong Tour team. Wearing the yellow coat keeps reminding me that I've been involved in an important project. says Nassirou Bizo Mailoga, one of the team members.

Hosted by the Academy for International Communication of Chinese Culture(AICCC), at Beijing Normal University, the Looking China project is a cultural experience in which international students make documentaries about China from their own perspectives with one-on-one help from Chinese students, forming a special director-producer relationship. This year's themes, Post-Pandemic Era and Agriculture, portrays a vivid China with eight documentaries. 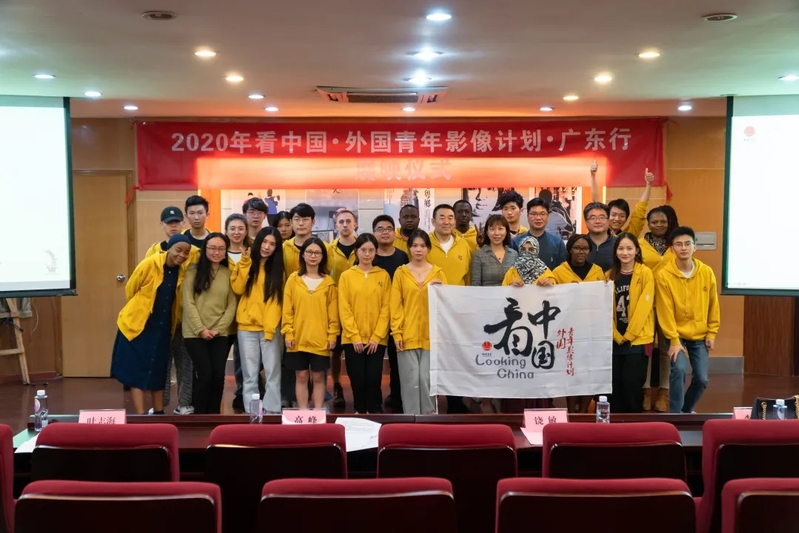 Four of the nine documentaries screened -- THE WORLD IN THERAPY, THE WHISKEY DIARIES, Fight and OUR Heritage OUR Health -- were shot in two modern cities, Guangzhou and Shenzhen, to paint a picture of post-pandemic China.

For “THE WORLD IN THERAPY,” its director KENEUOE NTENE interviewed an African student who had to stay in China after graduation because of the pandemic, a woman who opened an art shop during the pandemic, and an African owner of a shoe-shop who has lived in China for 15 years. The film examines their thinking on pandemic trauma and racial prejudice, calling on everyone to unite against the pandemic.

The prologue features the words of the student director from Lesotho: “Deprived and isolated, scared and misplaced, yet strong and hopeful, as an international student from Lesotho living in Guangzhou, China, I had my fair share of the pandemic trauma, but even with that, I realized that in this world, there are so many valuable things that bring us together, which matter more than those set us apart.”

Zheng Wei, an associate professor in JNU’s College of Arts, praised this film in the film festival for its profound meaning expressed in such a short time. “We can learn from this work how to trigger people to think in the term of documentary,” he said. “This film indeed shows us a brand new way to conduct deep discussion.”

“THE WHISKEY DIARIES” shows how two friends from different nations are connected by the same hobby -- wine -- and present how different cultures can communicate with each other on an equal basis. “Fight” tells the story of Sana’a, whose father died of COVID-19; she fought the hardship of life through her knowledge and determination, becoming a light for the film’s director, Salma Asghar. “OUR Heritage OUR Health” focuses on traditional Chinese medicine to express a Botswanian student’s hope to conserve Africa’s own traditional medicine culture.

Four films were shot in a historic city of Guangdong province, Meizhou, to record the charm of rural China from different angles. Through a Congo student’s experience, “NEW FARM TOOLS” reveals how live-broadcasting platforms influence the grapefruit industry. “A TAO A CARP A WOMAN” by a Thai student tells the story of a traditional craft – the carp lantern weaving – through a craftsman, Yishuang Lan. “Unraveling The Mystery Behind Chinese Tea” records a Nigerian student’s journey from leaf-picking to tea-tasting.

“DEAR AZIZ” is a spoken letter written by a Nigerien student to his best friend, who has died, to share his exploration in the ancient Chinese town of Baihou. “Some houses are over 100 years old,” Nassirou says in the narration. “I love how the culture lives on. In our country I’ve never seen such old buildings”

“Oh Aziz, surely you would’ve loved the adventure here,” he says, linking the simple, peaceful, Chinese county life with his inner sorrow and unforgettable friendship. This poetic ode to friendship has brought moving tears to many viewers both in the festival and in the remote Niger, he said.  “When I sent the film to my family, they were like ‘what! You did this?’ ´he said. “So it’s really a surprise.”

In the audience was Pei Yu, whose television and film company includes a project called the China International Documentary Competition for College Students. He expressed appreciation of these films’ content and the form of the Looking China project, “The form of this project is creative. I think we should have more similar projects to promote cultural communication. ”

Zhang Huan, a student in the audience, said of “DEAR AZIZ: “It’s different from  the usual projects where all team members are Chinese.” I would watch it again only if I could find it.”

The screened documentaries except for “THE WORLD IN THERAPY” will be uploaded on YouTube (https://www.youtube.com/channel/UC9opo9d_IzczRg_n23s4Qdw) and Tencent Video.

What audiences can’t see is the unique experience and great effort behind the films. “I like documentary, but this is the first time for me to be a director,” said the director of “OUR Heritage OUR Health” Mamelang CYNTHIA MMUTLWANE. “I think the project has improved me in that when I’m watching a documentary, I’m not only listening to the message; I’m also thinking about what happened behind that.”

The corporation between the one-one Chinese producers and foreign directors is a special experience for both international and Chinese students. “ I really enjoy the process,” Nassirou said of  his first long-time cooperation with a Chinese“My partner is very friendly. He was the one who cooked for us.”
Zhuoyue Qin, who produced  “NEW FARM TOOLS, said: “I gained many friendships as well as valuable film-producing experience. This is the happiest project I’ve joined this year.”

Yet the process was not always filled with joy. SAE YONG MR.XIANLONG, the director of “A TAO A CARP A WOMAN”, “I remember Jianwei Chen, the producer of “DEAR AZIZ”, wore out two shoes because he walked too much. That filming group even lost contact with us because they went to a remote county.”

Nassirou found communication was the biggest problem. If I'm speaking English, sometimes my partner can't understand what I mean, and my Chinese is also not good,' he said. Mamelang said of herself and her partner: We were two very different people. She's Chinese and I'm Botswanian, so we don't think alike...When she is doing something, she has the Chinese audience in mind. And I have my people in Botswana or Africans in mind, so that means the content is going to be different.'” When she and her producer couldn't decide who was right, Mamelang said, they sought help from their advisor, Qihui Wu, a teacher in JNU's College of Arts.

It's a challenge to work with a completely different people, but it can also be a chance for the participants to slow down, to know what different things can be in others' mind, Wu said. Differences don't tear us apart once we try to understand each other. If this works for individuals, so will it works for nations rather than directly telling the students what to do, Wu acted more as a moderator. Each of them came with their own ideas, sometimes they may collide with each other, she said. I tried to make that sparks brought by the collision beautiful, not destructive.”

The project has changed Mamelang's view of China. When she was growing up, she said, says her impression of China came from kung fu movies, most of which are shot in rural China. When I really came to China for the first time, I was impressed by how big and modern Shanghai and Guangzhou is, she said. I like Meizhou because Meizhou is closer to my country in a way... This project has helped me to see the rural China and to appreciate it.”

“I knew the culture value of China, but I’m not seeing it in Guangzhou,” Nassirou said. “When I joined this project and went to a village, I found the people there really cherish the present time and conserve their traditional value , “I wished the time of the project could be extended so that we could fully explore the life there and shoot better films.”

The time of the project may be extended, but the curtain has fallen on the 2020 Looking China Project·Guangdong Tour. “If there is still a chance, I will choose to cooperate with foreigners.” said Zhuoyue Qin, one of the Chinese producers. “In fact, the process of cooperating with foreigners is also a process of cultural exchange.”

Gao Feng, executive dean of AICCC, said: “The successful conduction of the project during the pandemic is a powerful refutation of culture conflict theory, as well as a vivid proof of people’s capacity to cooperate on the same boat in face of difficulty.”

As the audience was leaving the hall, chatting about their favorite films, “the Minions” gathered to take photos on the stage. “Yi, er, san(1,2,3 in Chinese)! Say cheese!” Hugging one another, the yellow-coated team members formed a colorful field of friendship.