Song issued Cong an appointment letter, put a school badge on him and welcomed him to JNU.

Since 1978, Jinan University, a pioneer of medical education in a comprehensive university, has cultivated a huge medical talent pool for Guangdong, Hong Kong and Macao as well as regions in the Belt and Road Initiative. Song said Cong's appointment as an honorary professor was a new opportunity for the development of medical education at JNU and would help it embark on a new journey in talent cultivation, discipline construction, academic research and other respects. 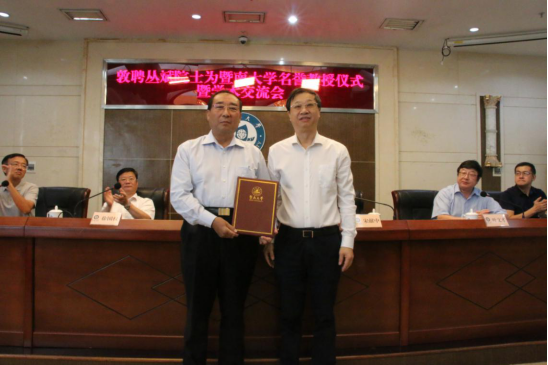 Cong responded that it was his great honor to be an honorary professor at Jinan University and that he hoped for a substantial cooperation with JNU. He then gave an academic report expressing his views on the direction of modern biomedical development. Over 70 people include leaders, teachers and students from the School of Medicine attended this ceremony.