Examination Authority and State Language Promotion Base Open at JNU

The opening ceremony for the Examination Authority of JNU's College of Chinese Language and Culture and the State Language Promotion Base was held at the college on July 14. At the ceremony, hosted by Deputy Dean Zhang Li, JNU Deputy Party Secretary Sun Yu spoke and opened the examination authority and the promotion base, with other leaders present. The examination authority appointed JNU Party Secretary Lin Rupeng as its president. 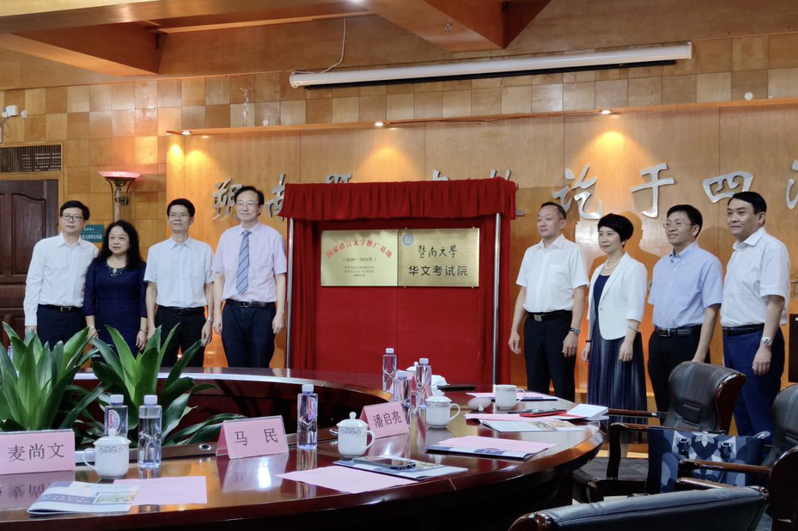 (The opening ceremony)
Sun expressed congratulations on the official opening and thanked all sectors of society for their long-term care and support. He pointed out that the successful application of the base demonstrated the Ministry of Education's recognition of the college's achievements and allows the college to better serve the national strategy in the future. With a commitment to scientific research, the Examination Authority will put JNU's College of Chinese Language and Culture in a better position to pass on and spread Chinese language and culture overseas.

Dean Shao Yi said the college had been leading the field for many years. Since the Heritage Chinese Language Proficiency Test (known as HSC, for its Chinese name, Huayu Shuiping Ceshi),   designed to measure heritage language levels of overseas Chinese, and the Chinese Teacher Certificate Examination have bridged the gap in overseas Chinese education, he said, it is the perfect time to open the examination authority.
The two tests in Chinese language education, known as the Two Standards, have made progress in passing on and disseminating Chinese language and culture around the world. To date, HSC has been offered by 16 countries on five continents, with 41 testing venues. The Chinese Teacher Certificate Examination has been offered at 185 test sites in more than 20 countries, including Indonesia, Thailand, Myanmar, the United Kingdom, Japan, Canada and South Korea. Of a total 10,486 participants, 6,089 have obtained the certificate.