Of the 4,762 freshmen in the class of 2019, more than 2,000 come from Hong Kong, Macao, Taiwan and abroad. Although they represent more than 50 countries and regions with different backgrounds of life and growth, most love Chinese culture and are deeply attracted by the charm of Jinan University. Here are some of their stories

Sara: I am so concerned about the people in my country that despite the long journey, I am studying pharmacy at JNU.
This is the first time Sara, from Morocco, has come to China. She said she chose JNU for its strong international features and its open, inclusive atmosphere, and pharmacy for her deep concern about people. She has visited many places in Morocco to gain deep understanding of the lives of farmers and other local people. She feels that studying pharmacy can lift them out of disease and poverty.

Zahraa: I made my first Chinese friend at JNU.
Zahraa, from Iraq, has been in Guangzhou for seven years. She is 20, and her family now lives in Guangzhou. When she attended an international high school, she communicated with students from other countries. However, it was at Jinan University that she made her first Chinese friend. Zahraa has been to Beijing, Shanghai, Hangzhou and Sanya. Her rich experience has taught her about China's great rivers and mountains. But what has impressed her most is the sea change in China over the last seven years. The rapid development of high-speed rail has made travel greatly convenient. Mobile payment allows her to enjoy convenience. At the same time, she believes she will be able to integrate into the JNU family as soon as possible and find her own happiness and place.

Huang Lizhen: From Nanyang to JNU to pursue dreams in civil engineering
Huang Lizhen, from Malaysia, is a fourth-generation overseas Chinese who can speak Chinese fluently. He said entering the 2019 preparatory class in College of Chinese Language and Culture has brought him a step closer to his ideal profession. He studied business in high school but had a unique interest in and insight into the art of architecture. Now he has chosen JNU's preparatory class in civil engineering and is striving to be admitted to that program next year.

Since entering JNU, he has quickly adapted to his new life and is full of curiosity about the new environment. Although his classmates in the preparatory class are from Hong Kong, Macao and Taiwan as well as overseas Chinese, everyone communicates very easily within the diverse and inclusive cultural atmosphere. 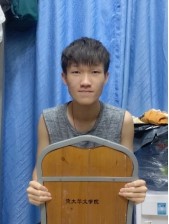 Adam：An Overseas Student Hoping to Be the Sino-U.S. Exchanges Envoy
Though Adam Yurkiewitz comes from the United State，he spoke as the representative of JNU's 2019 Chinese graduate students at the opening ceremony of the International School this year. His sincere speech, which cited Chinese classics and ancient works, fully demonstrated his deep understanding of China and its culture.

Turning to his reasons for studying Sinology, he said China's rapid development and fruitful scientific and technological innovation have attracted worldwide attention, demonstrating that China is not only a big, powerful country, but also a beautiful one with a charming environment, a long history of culture and a rich culinary tradition.

Adam hopes to become a U.S.-China exchange envoy through continuous understanding and learning about China in his future study.

Uzair Khan: Four visits to China Because of Enduring Fascination with Chinese Culture

Uzair Khan, a freshman from Pakistan, has a close connection with China. This September is his fourth trip to China. Encouraged by his father, he participated in a summer camp in Urumqi when he first came in 2016. The next year, he visited the great rivers and mountains in Northwest and North China, from Turpan to Beijing. He went to Beijing in June 2019 and traveled all around the famous scenic spots there. He said that it was not only the Chinese language but also Chinese culture that fascinated him. Therefore, he came to Guangzhou to study at Jinan University.

Elizabeth: Loving Chinese Poetry and Tea Ceremony
Though Elizabeth comes from Russia, she enrolled in a one-year preparatory course in JNU's College of Chinese Language and Culture. During this period, she learned basic Chinese and Chinese history and culture, which strengthened her desire to study in China. Now she has begun studying finance in JNU’s Management School.

Elizabeth has been very fond of the Chinese tea ceremony ever since she came across it in a small shop in Guangzhou last year. Her love of the tea ceremony demonstrates the charm of classic Chinese culture, which transcends nationality.

Liang Junpei: Taking JNU as the Motivating Force and Completing the Powerful Counterattack”

Liang Junpei, from Macao, was recommended for admission to JNU's human resources management major, even though his grades in junior high school were poor and he even defines himself as a poor student.

Liang began to know and take an interest in JNU in his third year of junior high school when he heard about the colorful campus life here from seniors. He set himself the big goal of attaining the quality to be recommended to JNU. Wang Tianjin: Starting a New Journey in a Diverse Environment

Wang Tianjin, from Hong Kong, is a freshman majoring in Chinese international education in the College of Chinese Language and Culture's applied linguistics department. She has had a strong interest in linguistics since she learned in high school that JNU's Chinese international education program was a characteristic and key construction major in Guangdong. I can learn not only Chinese, but also English and Spanish at the same time, she said. Receiving diversified education here makes me feel happy, and my dream is coming true.”

Her strongest feelings when she walks into JNU are pluralism and tolerance. The JNU cultural atmosphere of getting along with students from all over the world has brought her a different experience from high school life and given her a new sense of belonging. Wang expressed her best wishes to China on the 70th anniversary of the founding of the People's Republic of China. I hope our country will become more prosperous and our young people in the new era will become more self-reliant and confident!” she said.