JNU commemorated its 110th-anniversary and the “Building a High-Level University” project on Nov. 19 at the Shaw Sports Complex on the main campus. In attendees were state and local government officials, representatives of other universities in China and abroad, the media and JNU leaders, board members and alumni.

The scene of the meeting

Qiu Yuanping, director of the State Council's Overseas Chinese Affairs Office, congratulated teachers, students and alumni on the annniversary. She said the university has achieved phased results in talent development, research, social services and cultural inheritance by carrying out the "Building a High-Level University" project. The Communist Party of China and the country entrusted JNU with special missions, she said: to forge ahead with determination and pursue innovation with a pioneering spirit. To fulfill them, JNU has been committed to cultivating talents for overseas Chinese communities, Hong Kong, Macao and Taiwan. It has also helped promote the "Belt and Road" initiative by providing education in Chinese language and culture in the regions along the route. Such efforts enable JNU to tell China's story well, develop overseas resources and contribute to new prospects for the country's public diplomacy, Qiu said. 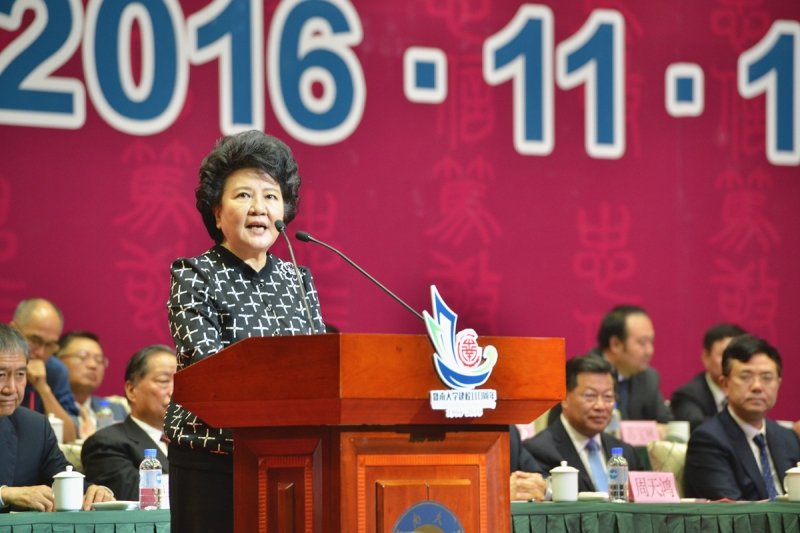 Also present was Guangdong Vice Governor He Zhongyou, who said that over the past 110 years, JNU has trained nearly 300,000 students from over 160 countries and regions. It has provided strong human resources for the region's reform and development; promoted cooperation among Guangdong, Hong Kong and Macao; and greatly contributed to overseas Chinese affairs and China's unification. He also promised that the government would create more favorable conditions to support JNU's reform and development. He expressed the hopes that the 110th-anniversary would be a new starting point for JNU to carry on its work, giving full play to its advantage as a top university for overseas Chinese. By further improving the quality of education, deepening education reforms, gathering and exploring education resources, promoting international exchanges and building its own characteristics, he said, JNU will develop into a first-class university, train more talents for society and help Guangdong realize the goals of modernization in education. 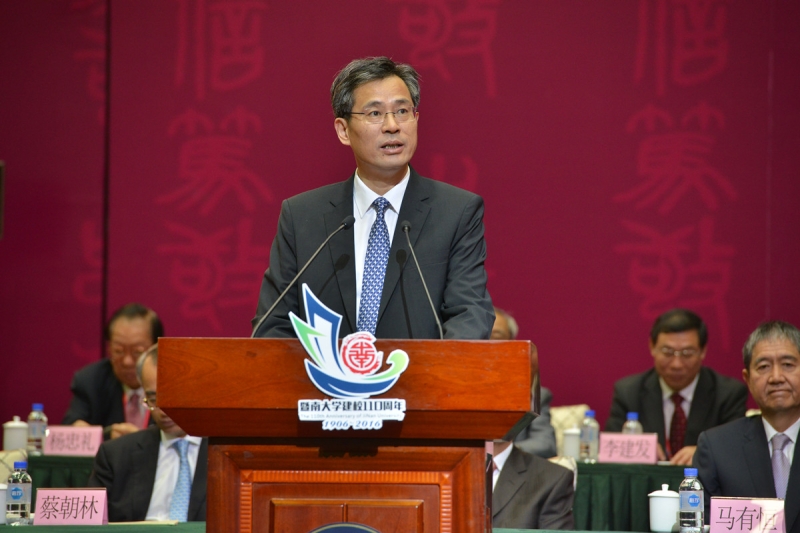 President Hu Jun warmly welcomed the attendees on behalf of more than 50,000 faculty members and students at JNU. He said, "Looking back at the past 110 years of hard work," he said, "we deeply feel that JNU can't develop without the concerning of the Communist Party and the State Council; the appropriate leadership of the Overseas Chinese Affairs Office of the State Council; the Ministry of Education and Guangdong provincial government; the full support of central ministries, Guangzhou municipal government, universities home and abroad, as well as JNU's board members, alumni and others."

Hu also said that while the 110th-anniversary celebration, both domestically and overseas, was a grand festival that people at JNU cheered, it was also the first inspection of the university's progress in the 21st century. Since China put forward the goal of building "Double First-Class Universities" (first-class universities and subjects), JNU has joined the "Building a High-Level University" project. The fundamental approach to the goal is to improve students' abilities, Hu said, and the specific method is to enhance subjects' quality, with the research level as the measuring tool. Building JNU into a high-level university requires it to form its own spirit and culture, which happens to be the cornerstone of JNU. 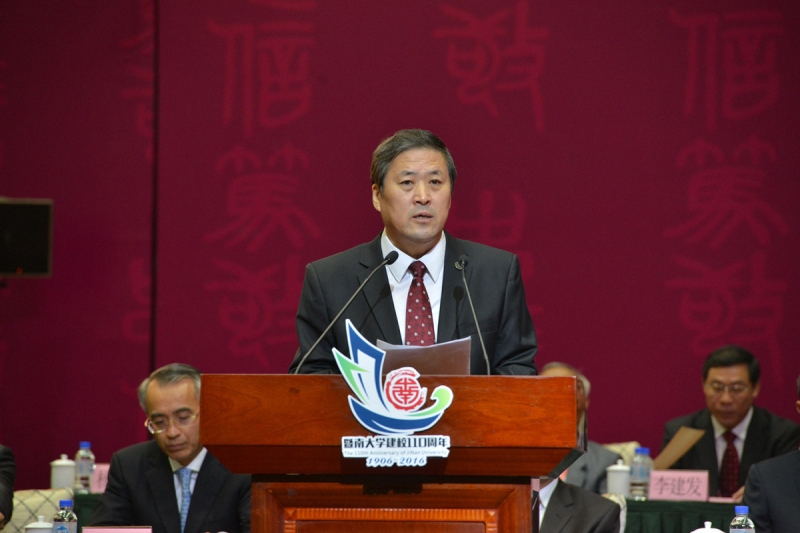 Ma Youheng, chairman of JNU’s General Association for Alumni, gave his best wishes for JNU's anniversary. Ma, who graduated in 1968, said he missed his days here. As a university for returned overseas Chinese students and those from Hong Kong and Macao, he said, JNU impressed him not only with its determination to cultivate talents, but also with its great concern for students. His experience at JNU formed his determination to serve the country and Macao all his life. "It is my responsibility to serve JNU," he said. "What I've taken from society should be used for society. I would strengthen ties among alumni to promote JNU's development and lay foundation for our successors."

Cheng Guobin, chair professor of Yangtze River Scholar Program and a leading figure on philosophy and social science in the National Program with Special Support for High-level Talents, spoke on behalf of JNU teachers. Having been at JNU for over 22 years, Cheng has witnessed great changes here. He expressed his pride as a "Jinaner" and said he realized the grave responsibility he and his colleagues shoulder in the new era. Cheng said he believed JNU would embrace a glorious future with support and joint efforts from people of all walks of life.

Student representative Li Qinqing, a junior majoring in bioscience in the College of Life Sciences and Biotechnology, extended his gratitude to JNU. "Show respect for your teachers and affection for your alma mater, and aspire to rejuvenate the Chinese nation; improve your virtue and refine your achievements to make contributions to your country," he said, quoting from Mottos for Students at Jinan University, Li expressed his determination to follow the example of his predecessors, inherit JNU spirit, assume the grave responsibility for national rejuvenation and contribute to JNU's development.

Li Jianfa, vice chancellor of Xiamen University, spoke on behalf of peer universities and JNU alumni. Li graduated from JNU's accounting department in 1984. Returning to campus, he said, he felt proud and encouraged by its great achievements and changes. As both Jinan University and Xiamen University are for overseas Chinese students, he said, cooperation and exchange of ideas should be promoted in the new era. "The two universities will usher in a new stage of development,"he added.

Andy Schofield, vice chancellor of University of Birmingham in the UK, brought greetings from its teachers and students. As the Union College jointly established by the two universities was having its opening ceremony that afternoon, he said, he hoped for JNU's rapid development. He concludedwith a traditional Chinese blessing: "I wish you bountiful happiness and the longevity of Methuselah."

Alumni at the 110th anniversary meeting