Date: May 13, 2019
Source: Wang Bo and Bo Dongying of School of Mechanics and Construction Engineering; Academic Committee Secretariat
Photographer: Liu Bing of the Communication Department of the Party Committee

The appointment ceremony of Yang Wei as a JNU honorary professor who will give the third in a series of lectures was held May 13, hosted by JNU Vice President Ye Wen, director of the Academic Committee. JNU Party Secretary Lin Rupeng spoke. Attending the ceremony were former JNU president and Chinese Academy of Sciences (CAS) academician Liu Renhuai; leaders of the Academic Committee Secretariat and the School of Mechanics and Construction Engineering; and more than 300 teachers and students. Lin introduced JNU's historical traditions and changes and reviewed the history and achievements of the School of Mechanics and Construction Engineering. He said he hoped the faculty and students, under Liu’s and Yang’s leadership, could make a concerted effort to pursue studies and achieve development; build mechanics into a first-rate discipline domestically with international impact; and encourage the development of other engineering sciences.

Ye gave a brief profile of Yang and his academic achievements. Yang is a professor at Zhejiang University; an academician of the CAS,  the American Academy of Engineering, the Russian Academy of Astronautics and the Third World Academy of Sciences; and a standing member of the 13th National Committee of the Chinese People’s Political Consultative Conference.

Lin issued Yang the appointment letter as an honorary JNU professor, presented him with the school badge and gave him a school souvenir. 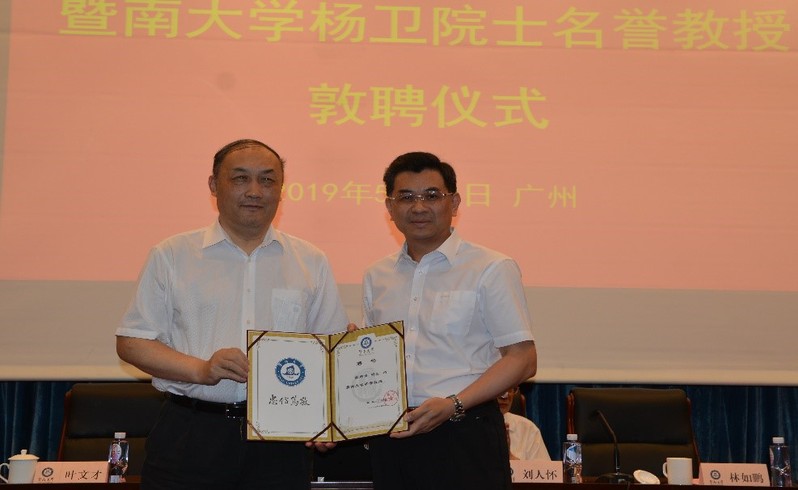 After the ceremony, Yang spoke on the topic Behave Well, and Study Hard.

Liu made a concluding speech, saying he hoped JNU students would learn  rigorous academic attitudes from their predecessors and contribute to the academic community.