Eight female soldiers from the Air Force Communications Brigade of the People's Liberation Army Southern Theater Command who participated in the National Day military parade in Beijing shared their stories with teachers and students at a JNU cultural lecture on Oct. 18. Prof. Yu Jixin the School of Journalism and Communication, presided. （The lecture）
Marching past Tiananmen Square on Oct. 1 in high spirits, more than 15,000 PLA officers and soldiers were inspected by the Party and the people to celebrate the 70th anniversary of the foundation of the People's Republic of China. Marching in step, the women, in uniforms and boots, showed the world the spirit and vitality of China's female soldiers in the new era.

We have a long story to tell, and we bear those glorious memories in mind. said Ye Mingfei, one of the female soldiers in the battalion. The distance between the east ornamental column and the west column is 96 meters, which took them only 128 steps and 66 seconds. Ye also added that they devoted much training to guarantee those 66 seconds would go smoothly. When the parade's opening bell rang, she said, she trembled and felt it was a dream. At that moment, she said, words failed her pride and excitement. 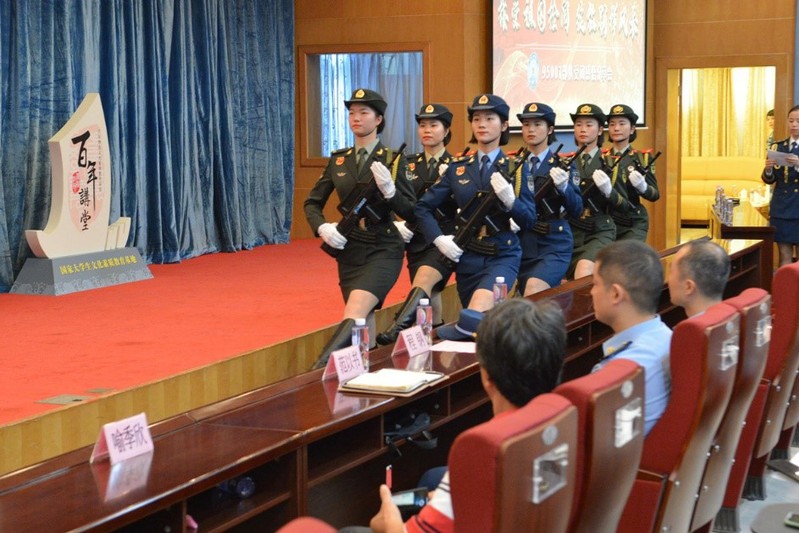 (Female soldiers demonstrating steps)
During the lecture, their leader demonstrated various kinds of training actions before inviting the audience to pose as soldiers. The hands-on experience gave teachers and students a deeper understanding of how they felt in the training and admired the appearance of female Chinese soldiers of the new era.

After the women shared their parade stories on the themes of their original motivations,  training and crossing Tiananmen Square, teachers and students said they were moved and awestruck by their strong willpower and training spirit.