Jinan University (JNU) is listed in the first-class discipline construction universities, and pharmacy, chosen by JNU, is rated as a Double First-Class Project. The successful selection of the medical and pharmaceutical disciplines would not be possible without the support of an outstanding team of professional talents. Yao Xinsheng, the honorary dean of JNU's College of Pharmacy and honorary director of its Institute of Traditional Chinese Medicine and Natural Products, was the core leader of this team.

As China entered a new era of reform and opening-up in 1978, the Ministry of Education decided to send students to study abroad. Yao was officially dispatched to the University of Tokyo in 1981 when he was 47.

He earned a doctorate in pharmacy from the University of Tokyo in 1983, becoming the first foreigner to earn that degree in two years in the 100 years since the university was founded. Two of his scientific articles had already been published in the famous international journal Tetrahedron Letters, and he had passed a series of strict examinations. They include exams in basic courses and professional courses, translations from English into Japanese and from Russian into Japanese, defense of his doctoral dissertation and interviews with 5 professors.

(Yao working in a laboratory.)

During Yao’s study in Japan, he successfully applied for two Japanese patents. He was the first man to have detected three pharmaceutically active trace compounds using isotope-labeled activity screening system to trace and separate them. His work referred to research on anti-inflammatory active constituents in soft comfrey, an herb used in organic medicine and fertilizer, and a systematic study of the separation and trace technology of the active constituents in traditional Chinese medicine and natural medicine.

From 1986 to 1987, Yao was executive vice president of Shenyang Pharmaceutical University (SPU) School

At the invitation of Kyushu University, Yao was a visiting professor for there from October 2000 to February 2001.

In 2002, Yao was invited to be director of the Traditional Chinese Medicine and Natural Products Research Center in Shenzhen, jointly established by SPU and the Research Institute of Tsinghua University in Shenzhen.

After that, he was invited to be an honorary dean of College of Pharmacy of JNU, in charge of establishing the Institute of Traditional Chinese Medicine and Natural Products. 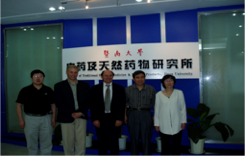 (Yao is second from right.)

Yao has engaged in research on traditional Chinese medicine and natural medicine for 62 years. He has published more than 500 papers in foreign and domestic academic journals; 462 of them have been included in SCI (Science Citation Index) since 1986, with total citation frequency reaching 4,601 and the highest citation frequency for a paper 34 times. In addition, he has published three national unified standard textbooks for undergraduates and postgraduates in the College of Pharmacy, including Medical Chemistry of Natural Products, Spectrometric Identification of Organic Compounds and Spectrum Analysis of Superconductive Magnetic Resonance Imaging. He has applied for 79 patents, including 16 authorized ones and 4 for successfully invented drugs. At the 100th-anniversary ceremony of the Chinese Pharmaceutical Association in 2007, he was granted the Award of Merit, as a pharmacy educator and natural medicine chemist by Han Qide, vice chairman of the Standing Committee of National People's Congress.