Concentrating on the great national and local demands -- including the protection of ecological environment of water, the exploitation and use of water resources and construction of scientific research, teaching and platforms -- hydrobiology at Jinan University features research on ecology of tropical and subtropical waters. Its national major scientific projects have included the Ninth Research Project of Major Water Project-East River of 12th Five-Year-Plan, the Key Technology Project of Using the Cleaning Function of Micro Algae to Make Biofuels of 12th Five-Year-Plan and 863 Program, Research Programs of the Utilization Technology and Demonstration of Ecological Remediation and Methane of Coastal Zone Near the South China Sea of 12thFive-Year-PlanNational Sci-Tech Support Plan, 973 Research Programs on Lakes of 12thFive-Year-Plan, Carbon Source and Evolution of Crustacean Plankton in Fuxian Lake, Research on Eco-chemical Behaviors and Toxicological Effects of Environmental Endocrine Disrupters in Pearl River Estuary.

The center has also undertaken local major scientific projects including the Science and Technology Project on the Measure of Promoting Biology of Zhuhai City by Improving the Water Quality of Dajingshan Reservoir; Research on Water Eutrophication Status and Management of Water Quality of Water Supply Reservoir in Zhuhai City; Program on the Plan of Construction of Ecosystem and Optimal Management of Huizhou West Lake; and Research on Eco-Security and Assessment and Guaranteed Countermeasures of the Water Source of Key Reservoir in Guangdong Province.

It has mainly undertaken the following research during the 12th Five-Year-Plan:

Reservoir ecology and control of the blue-green algae disaster.

Research on long-term evolution, model and simulation of freshwater ecosystems.

Research on fish ecology and river health monitoring and evaluation.

Coastal and estuarine ecology, and prophylaxis and treatment of eutrophication. 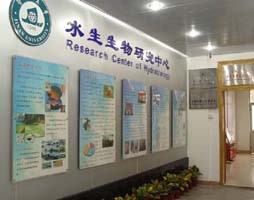